Performance of 1C platform on a remote server

As a part of examining the possibility of renting dedicated servers not only for web industry, but also for establishing information and accounting systems of various kinds, we attempted to qualitatively assess performance on the example of a 1C application server versions 8.2 and 8.3 functioning in dedicated environment together with CentOS 6.4 + PostgreSQL 9.1.2-1.1С, all software components being (x_64).

After getting acquainted with numerous materials and discussions on various Internet resources (e.g. http://www.infostart.ru, http://www.3nity.ru, http://www.mista.ru, http://www.ixbt.com, etc.) about performance of 1C applications in a client-server version, we decided to use a freely available test from V. Gilev (http://www.gilev.ru/tpc1cgilv/). Its results make it possible to qualitatively compare various sets of servers and their components, OS, DBMS and versions of 1C application servers, in order to define optimal configuration of the entire system, including price range.

Test results are shown in screenshots: 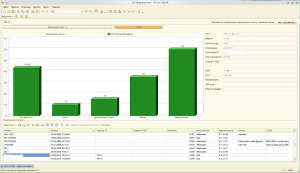 One should note rather considerable reduction of test score on 1C platform version 8.3.3 (for version 8.2.18, ceteris paribus, the score was 60), which is probably due to the difference in code execution on different platforms. The client end operated in the mode of an ordinary application (thick client).
We also tested the possibility of multi-threaded operation on the example of the following test (http://infostart.ru/public/173394/). This test makes it possible to estimate approximate number of parallel users, where in response time remains acceptable. 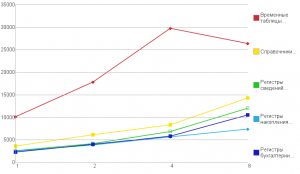 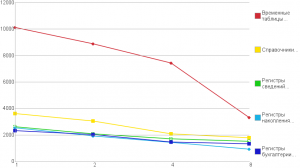 Conclusion: Taking 400-500 points per thread as an assessment parameter (see linked publications), below which there is a clear “drawdown” in performance, we can talk about using the tested system for simultaneous and quite comfortable work of 10-15 users.